The Home of the HanuHanu Gita 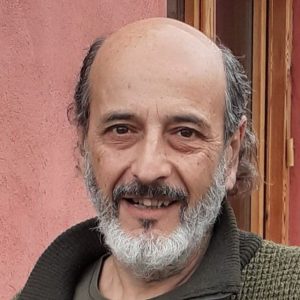 Me, I was born in 1954, in London. I have been a hippie, a monk, an author, a psychotherapist, and a homesteader. Now, at the end of November 2022, I live off-grid, not far from Barcelona, and am absolutely serious when I jokingly call myself ´Mark The Mystic Activist´.

I devote half of my time to the chickens, the allotment, and odd jobs on the land – and half my time to my ´mystical activism´. I have a Telegram Channel called ´ConsciousTribes´ (and another ´Tribus Conscientes´, in Spanish). The tag line reads:

CONSCIOUS TRIBES.
Connection & Co-Creativity
Inspiring and supporting the development of face-to-face (not online) tribes of 10 – 30 people – united in spirit, united in their hearts, and united in co-creating alternative, local cultures.”

On the channels I offer online courses, video-conferences, and perhaps above all The Soul Tribes Booklet, which paints the big picture of cultural transformation, but also gets into the nitty gritty of setting up small, local tribes – and offers lots of recommendations for keeping them conscious, and intimate, and dynamic.

I´m telling you all this because behind all of the surrealism and humour of the HanuHanu Gita, there´s not only a philosophy, but a path. The path of remembering we belong, the path of learning to live in our own, unique, subjective experience, the path of learning to live in deep and loving equality… And I have developed Conscious Tribes in order to offer a framework and structure for people to be able to live that philosophy and path.

But let me leave you with a little more about me….
At the end of the Soul Tribes Booklet I share my biography, in terms of my lifelong exploration of community:

I wrote a book `Sex, Spirit & Community´ in the late 1990s – trying to clarify what kind of Tribe I was looking for. And in my forties and fifties I co-founded and co-directed a project that promoted community based on a collective understanding of gender. We formed self-knowledge, growth and personal development groups for men, women and couples (not just heterosexual). At first it was wonderful, but little by little, I came to feel that this collective approach to gender was provoking too much anger in the women, and too much guilt in the men – and although I´d co-founded the project, I felt that, once again, my search wasn´t going to end there…

And so, at almost 70, after a lifetime of exploring how community is woven – I started the Soul Tribes project – still convinced, in fact more convinced than ever, of the beauty and importance, perhaps for almost all of us, of having our Tribe – and trying to unite everything I´d learned.

As I said at the beginning of this booklet: Soul Tribes are experiential (not online) Tribes of 10-20 people – united spiritually, emotionally, and in action (in becoming in-depenent of the dominant culture). After so many years of exploration it might seem a very simple vision – and it is – but sometimes it takes quite some struggle to arrive at simplicity!

And when I say “the first thing is” – I don’t mean to imply that a new culture hasn’t already been emerging for years. I recognise, of course, that many currents – from psychotherapy, to permaculture, to meditation, to holistic nutrition – have already been influencing mainstream culture for a long time. At the same time, I feel that there is a space we have to fill, if we are going to transform the culture in a radical way. This is the space between the individual activist, and the masses who come out to demonstrate. It is the space where The Tribe fits. We can´t do it alone. And we’re not really united if we only come together on the streets, or online. We are not really united if we don´t even know each other!

Perhaps the Plandemic is over. Maybe that´s true, maybe not. For me, it doesn´t matter. For me, the Plandemic was/is just a strategic manoeuvre, just a step on the ruthless and relentless march of the Dominant Culture towards a Transhuman and Inhuman Global Dictatorship.

In my opinion, we have to continue resisting. But for our resistance to be real, it has – deep down – to be affirming another way of being. And we have to practice this way of being, we have to learn it – and we don’t learn it by ourselves. We learn it in Tribe, together – in an atmosphere of trust, creativity and courage.

And we can co-create this atmosphere for ourselves, in our local areas. We don’t need every person on the planet to sign up – we just need a dozen daring souls to choose a life lived in the present, in the sacred present, in the magic and mystery of the moment – brothers and sisters, children and grandchildren – a dozen ‘grounded-dreamers’, ‘realistic-idealists’ – who also refuse to have their minds cropped by the Technocrats; who also want to live in openness, appreciation, and gratitude for the Gift of Life…

Make the call! Convene your own Tribe! Don’t expect someone else to do it for you! And as I have said, several times, in this booklet – I´m here: happy to support you in whatever way I can…
With love and respect always,
Mark the Mystical Activist.”

Stay In Touch Via The Blog

Send this to a friend